Education Outline for the Theory of Constraints

Book Review of The Theory of Constraints by Eli Goldratt, as an Event

Be Socratic -- If this is true,

then what else is also true?

1.  One could call the following first things first right the first time to start first grade at 3rd grade reading levels and doing math at 4th grade levels.  Don’t say your child does not have to be that smart.  You cannot predict what your child needs over his 85 year arc of effectiveness.  He will need to compete with the world.   Right now he or she  can learn at that pace, don’t waste it with low expectations!  If this is true, then what else is true?

2.  Let us start with another fundamental truth.  A child with 3 years of Montessori Preschool Education covering kindergarten in the third year going half days for 10 months out of the year will not drop out of high school.  And, will go on to some form of post secondary education.  More about Montessori written by the Columbia Teachers College is here.

If this is true, what else is true?

3.  Exactly what is first things first literacy as defined by Montessori.  Recap from David Gettman’s -- Basic Montessori Learning Activities for Under-Fives published in 1987.  Of course other pedagogy has also proven itself. In these discussions there are no reasons to stray from what has proven to work in a paid for economy.

4.Exactly what is first things first math as defined by Montessori.  Recap from David Gettman’s -- Basic Montessori Learning Activities for Under-Fives published in 1987. Of course other pedagogy has also proven itself. In these discussions there are no reasons to stray from what has proven to work in a paid for economy. 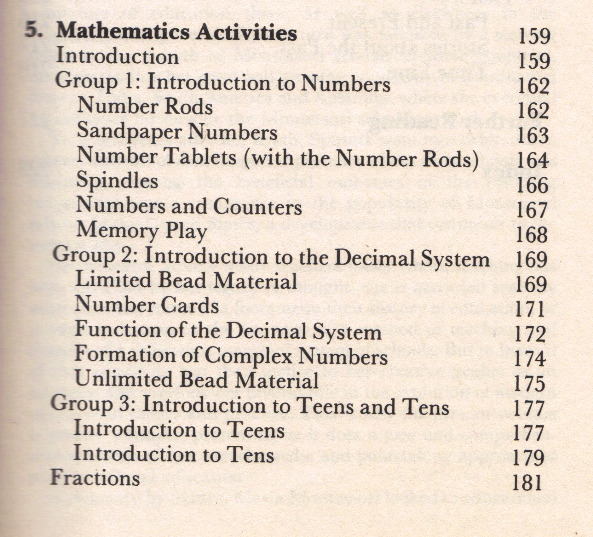 5.  The kindergarten class of the urban public school is not aligned with the above.  So the whole K-12 system is not aligned to ever remove the gap created by best practice delivering the suburban others and our world wide competitors.

When we say the schools are constrained by the literacy being taught and retained we are talking about the above. For simplicity and impact we are saying the system is constrained in the delivery of pages 131 to 181 above.

7.  The reasons for the difference that can be addressed by the citizen, minority, community, city, and businesses that pay for the public school include the following:  Many of these are causes in the current reality tree.

a.  Mom, Dad, Network, Family does not have the same positive expectation for the effort required at age 0-6.  They don’t know so much is on the line so early.

b.  The community does not know it boils down to the simple activities (at least) listed in steps #3 and #4 above.  The school district has not stated the requirement clearly or set itself up with discipline and commitment to help and insist with the best practice requirement early enough.

c.  Pre-k and the K-12 systems are separate silos of public spending on our most at risk children and the flow of outcomes of the first are not aligned with the input requirements for the next.

d.  Our democracy has lost sight of the fact that literacy is freedom and our nation was 97% literate when it declared independence.

e.  Our democracy has lost sight of a truism -To Succeed You Must Read- coined by Albert Briscoe @TSYNRUSA  and if you don’t succeed you will cost yourself and the nation excessive unnecessary pain.

f.  Nobody treats the public money or the public interest the same as their own so the natural first things first done right the first time noted above does not happen for the at risk without top down and bottoms up attention.  This fact regarding attitude causes a battle for effective K-12 systems.  Opinions are more than plentiful.

In a 13-15 year dual silo system it is only natural that many would decide to start reform in the middle or at the end in front of inspection (testing).  New high quality definitions of the 1980's and the concept of cost of quality have debunked the concept of inspection in lieu of building quality in one size fits one and would never start quality control in the middle of a constrained process.

g.  The natural first things first done right the first time is and always has been to do it as soon as possible because time is money and procrastination means lost time that cannot be recovered.  Lost time, money, materials, knowledge and opportunity is value lost to the individual, the nation and the world.

h.  God’s direction to bring up the child in the way of the God fearing parent and Dr. Maria Montessori’s defining of the child as our love for each other has clearly defined the sensitive period to learn language and order (math concepts) during the ages of 0-6.  Increasingly others have agreed.  Understand this is proven daily to be economic and prudent as a best practice using private money in the local economy.  So much that clearly parents concerned with the arc of the child’s effectiveness in the future have their children ready to read before kindergarten.  The child’s competition over 85 years prompts doing at least what we know will reduce the risk, not grow it.

9.  If this is true, what else is true?  Set-up on a group level of children is a waste for many in the group.   The need to set-up on each child at each class and grade disappears if first things first right the first time is done as soon as possible in the early life of the child.  This is big and should fund early activity within the concept that quality is free if first things first is done right the first time.

10.  The first thing cause–effect-cause is step #3 and #4 and when it is missing before the age of 5 1/2 the literacy and math capacity in the public school systems are overrun with needs in excess of capacity.  What clearly was not learned when best timing was available; would have avoided the need for over the top teaching  efforts that impossibly cannot make up for lost time of those behind.

11.  If first things first is not done right the first time the system of dependent events will not work like those in the suburbs.  Who thinks we have a choice?  Politicians, Educators and the powerful holding the money and spending it on issues that are not first thing first are everywhere.  Some might call it snakes in the grass that ignore the laws of achieving a goal.

Why not exclusively change only undesirable causes and effects that are first things first.  The changes can be tranched into the district to match the flow of children who were ready to read before kindergarten.  Of course that works if 100% of the children start ready.

12.  Doing first things first right the first time creates a high quality outcome step by step and this creates the positive expectation that high quality is free.  This is right out of the book by Philip Crosby.

13.  This should take you back to the start.